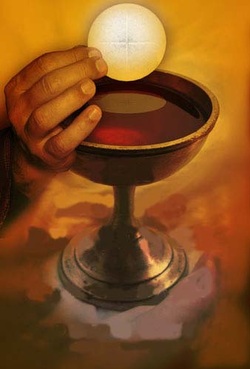 "Do this in memory of Me"

The Catholic Sacrament of Holy Communion of all seven sacraments, the Holy Eucharist, or Holy Communion, is the most central and important to Catholicism. Holy Communion is offered at every Mass, and in fact, the ritual of the Mass is largely taken up with preparing the hosts (wafers made of wheat and water, or gluten-free) and wine to become the body and blood of Christ and the congregation to receive the body of Christ. Transubstantiation is the act of changing the substances of bread and wine into the substances of the Body and Blood of Christ.
The Holy Eucharist refers to Christ’s body and blood present in the consecrated host on the altar, and Catholics believe that the consecrated bread and wine are actually the body and blood, soul and divinity of Christ. For Catholics, the presence of Christ in the Holy Eucharist isn’t just symbolic, it’s real.
When you receive Holy Communion, you’re intimately united with Jesus Christ — he literally becomes part of you. Also, by taking Holy Communion, you express your union with all Catholics who believe the same doctrines, obey the same laws, and follow the same leaders. This sense of participation in a larger community is why Catholics (and Eastern Orthodox Christians) have a strict law that only people who are in communion with the Church can receive Holy Communion. In other words, only those who are united in the same beliefs are allowed to receive Holy Communion.

Receiving Communion according to Rite The Holy Eucharist is food for the soul, so it’s given and eaten during Holy Communion at the Mass. However, how it’s distributed varies a bit, depending on whether you attend a Latin (Western) Rite Mass or a Byzantine (Eastern) Rite Mass: Dressing up for your First Holy Communion. When boys and girls make their First Holy Communion (usually in second grade), it’s a big occasion for Catholic families. Like their Baptism, the day of First Communion is one filled with family, friends, and feasting after the sacred event has taken place in church.
Girls typically wear white gowns and veils and often look like little brides, and boys wear their Sunday best or new suits and ties bought for the occasion.
The children are generally too young to appreciate all the theological refinements, but as long as they know and believe that it’s not bread or wine they’re receiving but the real Body and Blood of Jesus Christ, then they are old enough to take Holy Communion.